When you book with an account, you will be able to track your payment status, track the confirmation and you can also rate the tour after you finished the tour.
Sign Up
981

This popular and short cycling journey doesn’t demand extreme efforts, and will offer you wonderful scenery. during the tour you can see vast grassland dotted with sheep and yaks and traditional shepherds camp, never-melt snowy mountain, the Nyenchen Thanglha , sky-railway rushing through aside the road, holy Namtso lake sparkling in the sunshine. Riding is done along one of the main roads into Tibet – the well-built Qinghai Tibet Road. if tourists are lucky, they may see groups of pilgrims from nomadic areas to pray and do body length kowtow towards Lhasa.

Day 1: Arrival at Lhasa & Acclimation
Upon your arrival at Lhasa airport or train station, you will be greeted by your Tibetan guide and escorted to your hotel in Lhasa. From airport to Lhasa city, it only takes half an hour of driving along the Lhasa-airport highway. Driving along the Brahmaputra river, you will not only get amazed by the spectacular plateau scenery. If you take train to Lhasa, normally you will arrive in the late afternoon or evening, 20 minutes drive will take you to your hotel in Lhasa city.

Check into hotel, have a good rest to acclimatize the high altitude.
Stay overnight in Lhasa.

Day 2: Lhasa Tour – Potala Place, Johkang Temple, Barkor Street
Today’s tour will first bring you to the Potala Palace which is the winter palace of the Dalai lama. It was put to use since the 7th Century by the 33rd great king of Tibet. The most valuable collections of Potala Palace are the gilded burial stupas of former Dalai Lamas and meditation Cave of the 33rd great king of Tibet.

Then after lunch, tourists head to Jokhang Temple which was founded by the 33rd great king of Tibet in the 7th century, in order to promote the Buddhist religion. Inside you can see the statue of Buddha Sakyamuni at the age of twelve, perhaps the only most venerated object in Tibetan Buddhism. Around the temple is Barkhor street where you can do kora (a religious circle of a building or mountain) with pilgrims and locals, in the meantime you can buy souvenirs.
Stay overnight in Lhasa

Day 3: Lhasa Tour – Drepung and Sera Monastery
In the morning ,you are going to visit Drepung monastery which is one of the “great three” Gelug monasteries of Tibet, founded in 1416 by Jamyang choge, one of the Tsongkhapa’s main disciples. Ganden palace used to be Dalai lama’s palace in the Drepung before he moved to the Potala palace.

In the Afternoon, Tourists will visit Sera Monastery which is another one of the “great three” Gelug monasteries of Tibet, founded in 1419 by Jamchen Chojey, one of the Tsongkhapa’s main disciples. The hot attraction is the Monks debate at around 3 – 5 in the afternoon.
Stay overnight in Lhasa.

Day 4: Bike from Lhasa to Damxung (155km)
Cycle about 155km to Damxung along Qinghai-Tibet highway, the road is pretty good and smooth, You can first ride to Yangpachen to have a little rest.
After lunch, moving on to Damxung.
Stay overnight at Damxung.

Day 5: Bike from Damxung to Namtso (75km)
Nyenchen Thanglha snow mountain ranges appear in front of you all the way, Today’ most difficult ride is to climb to Mt. Nagenla Pass at.5190m high, the 4WD could take you and your bike to over the mountain pass if you need help.

After going through the mountain pass, you can see the sheepherders’ tents. You could see green grassland, groups of sheep and yaks, nomad tents by the road.

Namtso Lake is the Heavenly lake which is one of the three holy lakes of Tibet and also the highest salt lake. To spend a night at lake shore is fantastic. Situated at about 5000m high, Namtso lake is actually the lake in the sky, lying on the highest plateau in the world.
Stay overnight by the lake.

Day 6: Bike from Namtso to Yangpachen (123km)
While enjoying the clear morning at the lake shore, you can trek along the lake shore to Tashi Dor Island to explore the meditation caves.

Then ride to Yangpachen to enjoy the hotspring. The road condition is the same as the day before.
Stay overnight at Yangpachen.

Day 8: Departure from Lhasa
The guide will transfer you to the airport or train station and help you get on board. 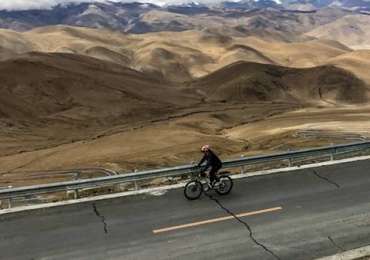 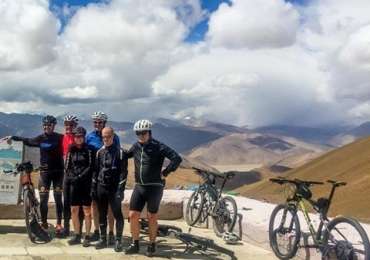 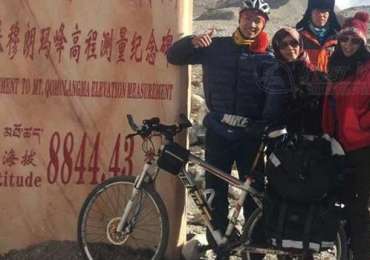 May 15, 2020 869Views 1Like
ShareTwitterFacebookEmail-1LinkedinInstagramYoutubeTumblrWhatsappGoogle+Pinterest-circled
Read More
9 travellers are considering this tour right now!